You walk outside and notice your car has a lot of new dimples that were not there the day before. Most likely, it is the result of the latest hailstorm that hit your area. After calling your insurance company or doing some research, you will hear a lot about Paintless Dent Repair or PDR for short. What is Paintless Dent repair? Is it reliable? Can it really fix all of my dents? If you have questions, we have the answers!

Before we jump in, it is important to know a little history first.

The History of Paintless Dent Repair 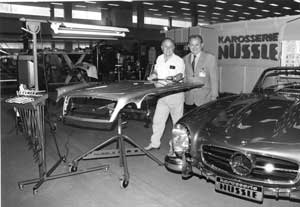 Paintless Dent Repair was invented almost by accident in 1960 by a man named, Oskar Flaig. While working for Mercedes at the “International Motor Sports Show” in New York City, Mr. Flaig’s job was to take care of the cars each day after the trade fair was over and everyone had left for the day. Scratches, dings, small dents and any other damage caused by the spectators all had to be repaired so the cars were in perfect condition for the next day’s round of people. Sometimes, the cars even needed to be repainted. As the story goes, Oskar Flaig used anything from a spoon to a hammer handle to push out the small dents as they would require less filler before painting to save time. Eventually, Oskar got good enough at manipulating the dents that he no longer had to use any filler or repaint. He saved a ton of time and the cars looked perfect…even to Mercedes’s strict standards.

When Oskar returned home, he continued to develop more tools to remove dents. Eventually, Oskar’s technique became known as Paintless Dent Repair and it swept all over Europe before making its way back to the US sometime in the 1980’s. Oskar’s discovery has saved billions of dollars and paintless dent repair is the preferred method to remove auto hail damage worldwide.
Source

How does Paintless Dent Repair Work?

A car’s body is made of metal so it is malleable. This means it can be moved, manipulated or coerced without breaking. So, when a marble sized hailstone hits your car at 20mph, it can leave a pretty big dent. It gets even worse when the hailstone is the size of a baseball and traveling up to 100mph. The science that allows the hail dent your car is the same thing that lets us remove it.

PDR requires highly specialized tools and highly skilled technician to use them. Think of PDR tools like big-boy dental tools. Both are built specifically for their intended purpose. Both also require years of training and practice to use them correctly and efficiently. Depending on the size of the dent and where it is located, it can be pushed, pulled, tapped or otherwise persuaded back into place using a very gentle PDR technique. Dents can be accessed from the underside like in the hood or through factory access holes in places such as the door or roof of the car. Once the dent is fixed, it will not move again. The same area can be repaired again if caught in another hailstorm.

The HUGE benefit of PDR is that it preserves your factory paint. You only get one factory paint job so you want to keep it as long as possible.

Here is a great demonstration on how Paintless Dent Repair works.

Nothing at all. Removing a dent is the same thing as repairing it in the PDR world. The way you say it may be determined by where you live or where you first learned about it. It is like that fizzy stuff that some call “Pop” while others call it “Soda.” We know what you mean. Ok, except for Georgia where they call all soft drinks, “Coke” for some odd reason.

What’s with the huge light in your Paintless Dent Repair pictures?

That light is a LED PDR Stripe Line Board specifically designed for paintless dent repair technicians. It projects lines of light onto the car’s finish. If there is a dent, however slight, the technician will spot it. Hail dents many be so shallow that they are not easily seen nor felt. The technician also uses it to check his work and makes sure it passes the light test before releasing the car to the customer.

What are the limitations of Paintless Dent Repair?

For hail repair, there are a few conditions where painting is unavoidable. If the paint is chipped or compromised, that area will have to be repainted. This would also go for a body panel that is so heavily damaged it just makes more sense to replace it than to fix. In these rare cases, we will repair everything before sending it out to one of our body shops to keep the painting down to a minimum.

Can’t I just go to a body shop to remove my hail dents?

You can, but you may want to read our blog on why you should use Paintless Dent Repair vs a Body Shop. Some body shops do have a full-time PDR technician that can remove hail dents or they contract with a PDR company to come in when it hails. It is important to find this out. A traditional body shop will have to drill, fill, sand or just replace the hail damaged body panel. When this happens, the area will have to be repainted. As much as they try, they will never be able to match the paint, exactly. This can affect the value of your car when you trade it in. Paintless Dent Repair is popular because no painting is necessary.

The Dent Company Bonus: No deductible and free rental with most claims.

We are Denver’s Auto Hail Repair and Paintless Dent Repair (PDR) experts. If you live in or around the Denver area and have hail dents in your vehicle, give us a call or stop by for an appointment. We have quick turn around times and estimates are always free.

With over 30 years of paintless dent repair experience, specifically auto hail repair, we know how important it is to choose the right company.

Got Hail? Call Us!